NOT ALL LITHIUM-ION BATTERIES ARE CREATED EQUAL

When looking into battery electric vehicles for mine application, you've no doubt come across the term "lithium-ion." This rechargeable battery type has been used in consumer electronics for decades and has since become the industry standard for battery electric vehicles. Further investigation into battery chemistry reveals considerable variety within the “standard” lithium-ion battery category. Each unique battery compositions comes with its own set of distinguishing factors, all of which are important when choosing the appropriate battery chemistry for electric vehicle application.

Two common battery compositions you are likely to encounter in electric vehicle research are:

Lithium Cobalt battery types are regularly used in personal, non-commercial electric vehicles. The popularity of Lithium Cobalt types is, in part, due to their high specific energy, which is approximately 60% greater than that of LiFePO4. This high specific energy allows highway rated vehicles to easily maintain highway speeds. In contrast, industrial electric vehicles are designed for significantly lower travel speeds in underground mining applications and can utilize batteries with a much lower specific energy.

Although it has a lower specific energy than that of Lithium Cobalt compositions, LiFePO4 has a significantly higher thermal runaway tolerance and is a major deciding factor in Rokion using LiFePO4 chemistry in all of its battery powered trucks.

What is Thermal Runaway?

Thermal runaway happens when an initiating event, often times a cooling system or enclosure failure, causes an increase in temperature, leading to a release of energy. This energy release increases the temperature even further which, in turn, leads to a greater release of energy. A thermal runaway becomes destructive when the energy can no longer be contained and releases uncontrollably. In the case of electric vehicles, a thermal runaway can result in battery cell explosion and vehicle combustion.

Rokion trucks are engineered to meet the harsh and potentially hazardous conditions of underground mining environments. Safety is the highest consideration during the design, engineering, and testing phases for all Rokion trucks. The safest battery chemistry available, LiFePO4 has a considerably higher thermal runaway tolerance than Lithium Cobalt types. For example, a LiNiCoAlO2 battery cell can start a thermal runaway at just 150°C (302°F). In contrast, a LiFePO4 cell withstands temperatures as high as 270°C (518°F) before the thermal runaway process begins. 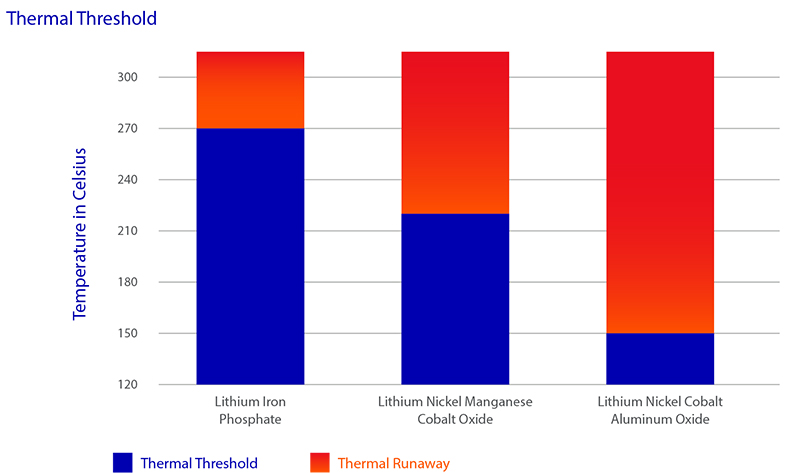 A Question of Safety and Performance

As battery electric vehicles become more common underground, advances in lithium-ion battery technology will inevitably emerge. Until these advancements have been proven to provide greater safety or performance than LiFePO4 chemistry, Rokion will continue to use this battery cell technology in all its vehicles. LiFePO4 batteries provide excellent mine performance and have higher chemical and thermal stability compared to all other battery types when used in underground mining applications.